All the lines in recycled plastics

When the Geomag brand was launched, in 1998, a new toy category was invented in Italy: magnetic building sets. Geomagworld later moved to Switzerland, in Canton Ticino, and – while carrying on with the classic line, based on magnetic bars and metal spheres with relevant accessories – developed more play platforms, especially (6 years ago) the Magicube line of variously shaped magnetic blocks mainly addressing little kids, as well as Mechanics, evolution of the classic line designed for engineering constructions with moving parts and explorations of gravity as a propulsive force (Mechanics Gravity, since 2018),for a higher age range.

Another important development led towards sustainability: “Starting five years ago we overturned the company gradually converting all our lines to the use of recycled plastics”, remarks Filippo Gallizia, managing director. “We chose to follow the fundamental principles of circular economy and it was a real challenge to find the right materials to be employed in manufacturing in order to replace technical plastics such as ABS. It proved to be a noteworthy engineering effort which implied investments in new moulds and equipment, but the itinerary has been completed now and the whole range is made of recycled plastics. Furthermore, the inner polystyrene parts were removed from the packaging and substituted by small pocket boxes in recycled plastics, as the bags also are; and the packaging is in recycled paper. Not many companies in the toy business can boast using raw materials coming from circular economy”.

Geomagworld is focused on the European market and presently on the promotion of the Magicube and Mechanics lines by informing consumers of their sustainability features: “In Italy they were very well received and we are applying the same model in the leading European markets, namely France and Germany where we see a high growth potential”, Gallizia says. “In Magicube we added the Peppa Pig licence and the range was extended with the Shapes concept, which introduces blocks in three new shapes; deriving from a line of ours addressed to schools, we have also developed one which assist in learning mathematics and English and includes a storytelling set with the Three Little Pigs fairy tale. Starting in 2022, all boxes of the Mechanics range are compatible among them thanks to very simple adjustments explained through video tutorials (Combo System)”. 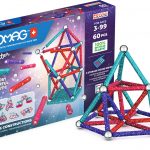 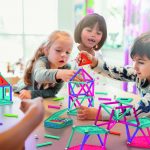 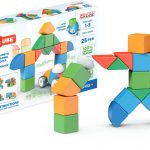 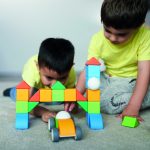 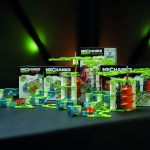 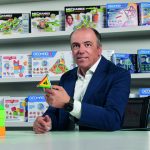 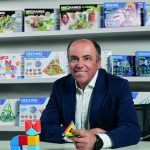 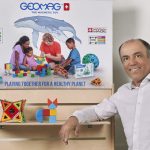 thanks to / grazie a